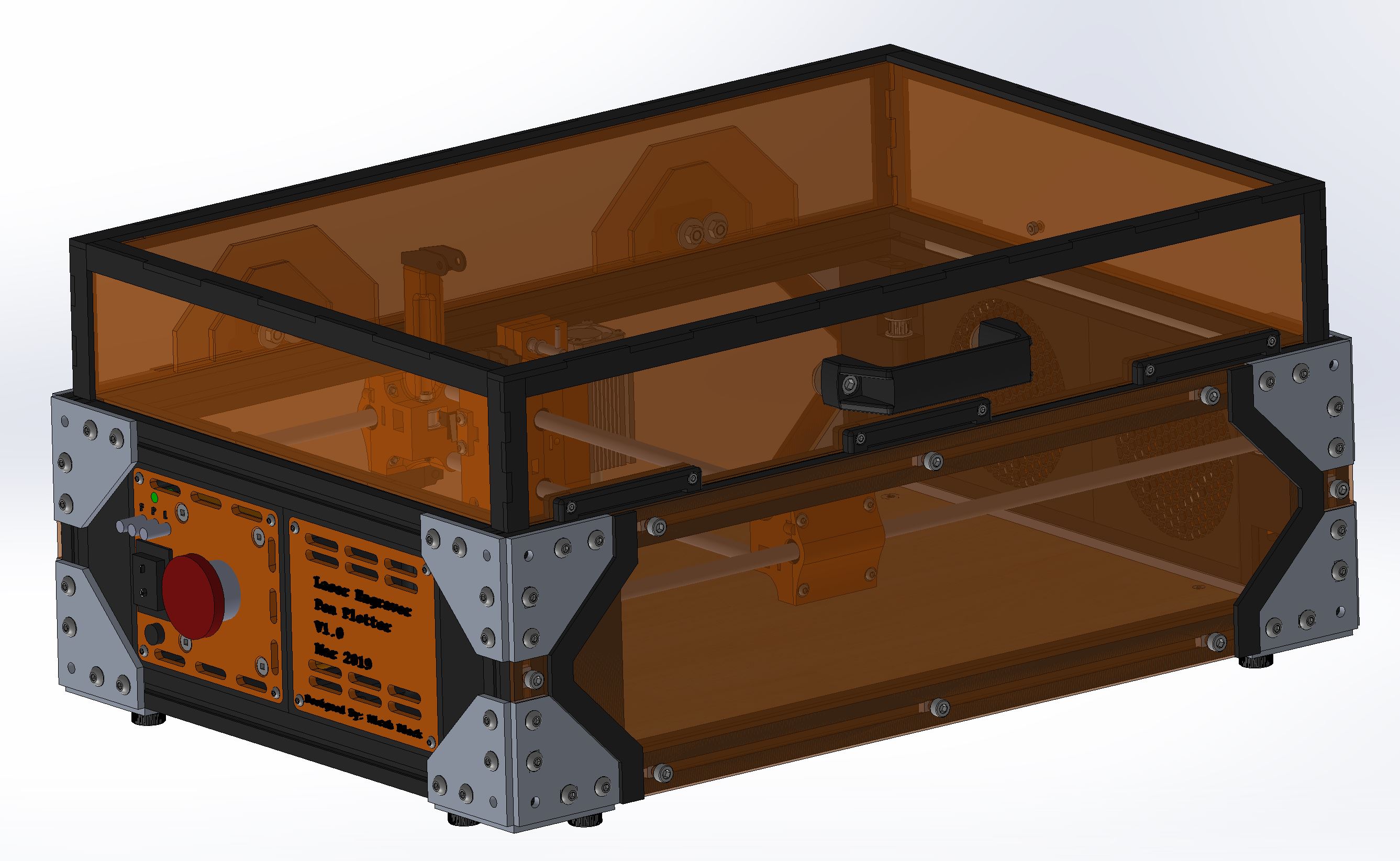 For the last few years, I have had an idea in the back of my head that I want to build a laser engraver. Over a co-op term, I decided I would finally make that happen. I decided to take a different approach to this project than I have for other projects, I would make a complete design first, and hopefully remove all problems during the assembly by doing so. I was also not going to skimp on any safety features, namely a full enclosure, proper emergency stop switch, and ventilation + filters. Making the design first also made me want to add drag chains, a hinged magnetic lid, handles for transport, a removable laser head, and many other amazing features that I would not have implemented otherwise. 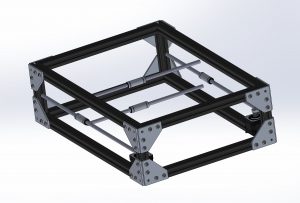 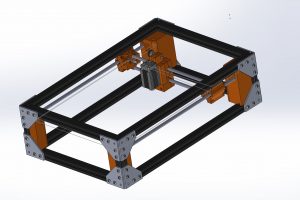 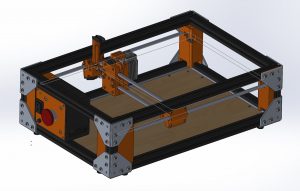 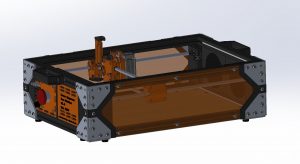 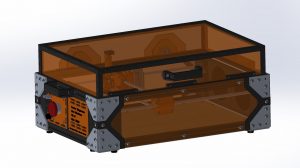 One of the reasons I decided to take this project now was that I recently learned about GRBL being ported to the ESP32 and some development boards available for purchase on Tindie. A Wi-Fi enabled laser engraver sounded like a great idea to me, so I bought some of the control boards, and some TMC2208 stepper drivers for silent motion that is backwards compatible with all other stepper boards. I had some NEMA17 steppers lying around from a previous purchase, and the laser is a 2.5W diode I had purchased from Aliexpress a few years ago in hopes of one day getting to use it.

Before printing all the parts for this, I upgraded my slicer to the newest Cura edition so I could take advantage of the Horizontal Expansion feature, which allows adding offsets for the amount of expansion that your printer has. It took a few test prints to get the correct values, but it was definitely worth it. The fan enclosures, electronics boxes, motor holders, and bearing holders all slide on the to aluminum t-slots very snugly, and will not be moving around unexpectedly.

The frame of the build is made with black anodized 2020 aluminum extrusion that I purchased from RobotShop, and held together with aluminum L plates and M5 bolts. This construction is way overkill for a laser engraver that does not have any horizontal forces on the moving head, but I decided to go for it anyways as it looks great and provides a great base for transport,  etc. The exterior dimensions of the frame are 500mm x 340mm x 140mm.

A slightly modified version of the traditional CoreXY belt system was used, keeping the 2 belts on separate planes instead of having them cross over at the end. This allowed to keep the belt paths clean and the overall size smaller. The rest of the motion system includes 8mm smooth rods, LM8LUU bearings, and GT2 timing belts and pulleys with integrated bearings.

The ventilation system is 2 low profile Noctua 92mm fans with a carbon filter in front of them. These fans fit perfectly between the upper and lower aluminum extrusions, and provide a decent amount of airflow even through the carbon filters – I would not have gone with cheaper fans, as they definitely don’t move as much air as these Noctuas. 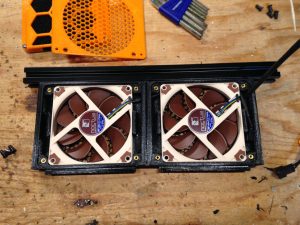 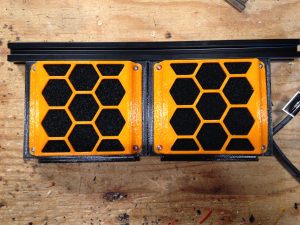 Internal lighting was another feature that I felt necessary to include, so I used some waterproof LED light strips that I have from previous projects. This fits perfectly inside the t-slot aluminum extrusions, and provides great lighting on the inside. 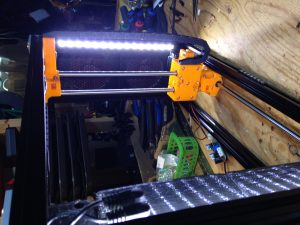 The enclosure is made from transparent orange acrylic. I knew I wanted the engraver to be enclosed, but I also wanted to be able to see what the laser is doing without opening the lid. The laser has a blue / near-UV wavelength, and I have heard that orange acrylic tends to absorb light of this wavelength. While I never actually verified this, I can say that looking at the laser dot through the acrylic is definitely different that without. I had originally decided to go with some laser shielding sheet from JTechPhotonics but once I realized that would mean spending a couple hundred dollars for the amount of acrylic I had needed for the design, I decided to just use some normal transparent acrylic. That lead to another search for a reasonably priced supplier that brought me to plasticworld.ca, where I was able to get the acrylic and the glue that I needed for around $100, and shipping was only $25 which was also a steal. While I was designing it, I also added some black acrylic accents to make the build a little more appealing, which turned out great.

As for gluing the acrylic together, I did not want to take shortcuts here either. There is one universally recommended glue for acrylics, also known as acrylic cement, solvent glues, or plastic welding, the Weld-On 4 and Weld-On 16 glues, which melt the acrylic thanks to some methylene chloride, and chemically bond the sheets together. This essentially creates a single sheet of acrylic once it is cured. 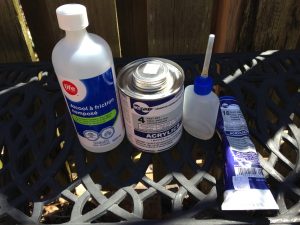 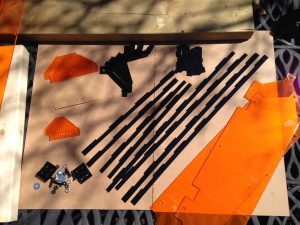 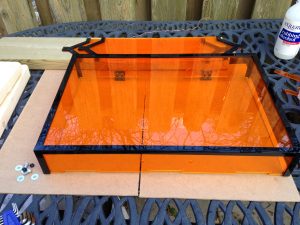 On the electrical side, I implemented a number of key safety features. An emergency stop switch, a large rocker switch as the main power button, individual toggle switches for the lights, fans, and laser power, and of course a fuse. These are all contained in one box mounted on the aluminum extrusions and the other box includes the ESP32 GRBL controller and the laser driver board.

The laser bed can be dropped out from the bottom using thumbscrews. I made this using a 1/4″ plywood wasteboard, a thin aluminum sheet to prevent burning through the plywood, all enclosed with aluminum angles to protect the sharp edges of the sheet metal. 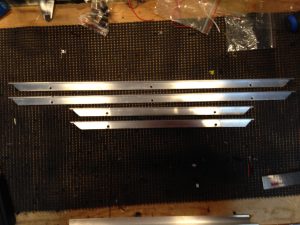 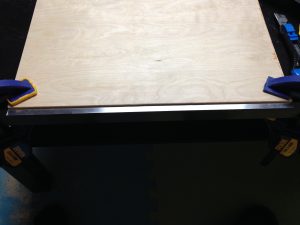 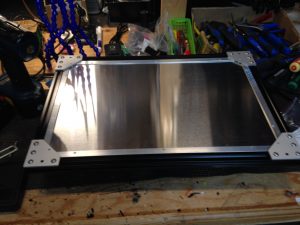 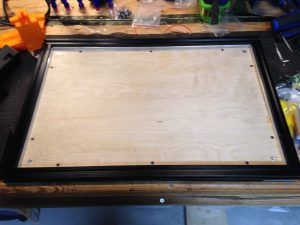 I’m super happy about how this build turned out, and how close it looks to the original model. I think that’s a testament to how much planning can help a project run smoothly.

The next steps on this project is to clean up the wiring a little bit, then start the final testing. I have already verified that the motion is smooth (and pretty much silent thanks to those TMC2208 drivers) and that the laser works. Now I have to put the two together, find an optimal federate, and then find some software that will allow me to engrave images!

The first tests on this machine were engraving squares and circle with G-Code I wrote myself. After a long process of focusing the laser, I got some amazing and consistent results. I wanted to use a vector graphics platform to control the laser, and found a laser tool for Inkscape from JTechPhotonics. It took a little while to get it properly set up and useable (partly because the X-axis on my machine is reversed and the GRBL invert axes settings don’t seem to be playing nice with the CoreXY system), but once that was complete, I had a fully functional laser engraver. The first image I engraved was my logo, of course, on the same test sheet I had been using for the squares and circles! 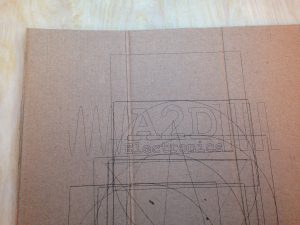 A bunch of pictures of the design and build process can be found below.