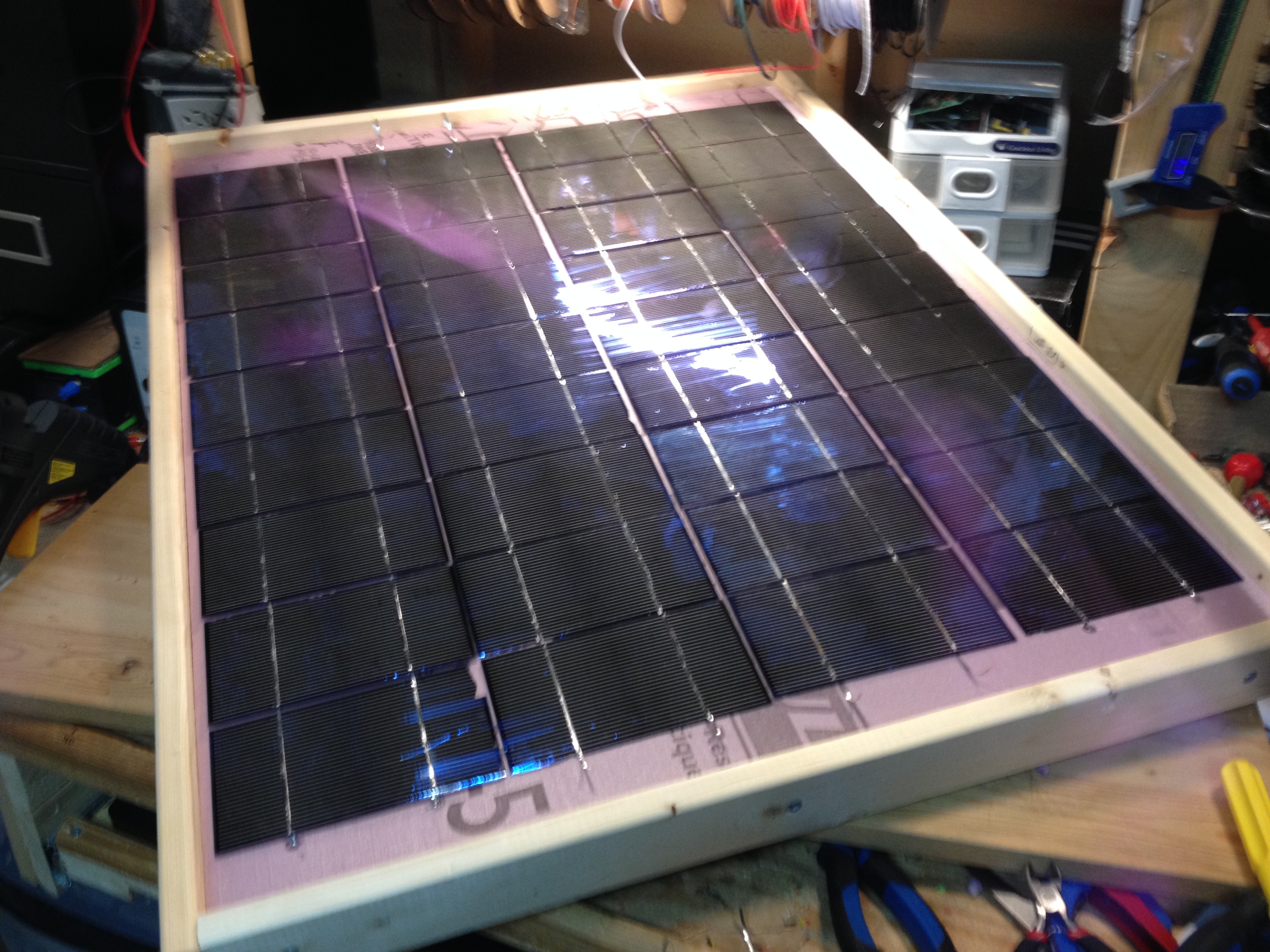 A few months ago, I found a 100W solar panel kit on kijiji for $50. I had previously built a smaller solar panel to see if tabbing cells myself was actually viable. Quite a few cells were broken in the process, but I got the hang of it and managed to build a small panel, so I decided to try a bigger one. 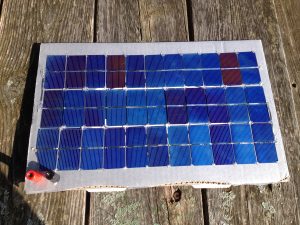 The bigger cells were thicker and easier to work with, but it still took a few broken cells to get used to them. A few broken cells means that I could not build a 100W panel, but after building a 50W panel I’m glad I didn’t have the option of a bigger one – it would have been too big.
I made this panel as cheaply as possible, and used some fairly unconventional and not necessarily recommended methods of framing and protecting the cells. Let’s go over the frame first. As you have probably guessed from the pictures, the outer frame is not made from the industry-standard aluminum, but 4 pieces of 1×3 that I got for under $5 at the hardware store. For the backing of the panel, all that’s needed is a solid material that is preferably as light as possible. I went with some rigid foam insulation, as it fit the requirements fairly well. Usually, EVA sheets are used for this, but that certainly did not fit the ‘cheap’ requirement. I used only about $4 of rigid foam insulation. 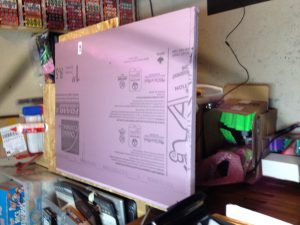 To cover and protect the cells, a piece of glass, acrylic, or epoxy resin are commonly used but again far from the ‘cheap’ requirement. I found a few posts on solar power forums using clear spray paint to protect the cells. This is certainly less durable than the traditional methods, but works for my purposes. I would not leave this out in the rain or in heavy wind, but on those days, there is usually not much sun anyways. The other thing I had to consider was the amount of light that gets through to the cells, which I tested by spraying 1 of my small cells with a generous layer of spray paint. I measured the short circuit current of that cell and an un-coated cell, and found about a 10% reduction in output current. The open circuit voltage did not change. I believe the commercial methods get about 2% drop in power.

Now to go through tabbing the cells. This is definitely the most tedious process of building this panel. As mentioned earlier, this is a skill completely different than soldering 2 wires together. The general process is to put flux on the cell, then lay the tabbing wire across the pads, and drag your soldering iron along the whole length of the cell. The tabbing wires should be just shorter than the length of 2 cells, so that when you connect them in series, there is no risk of shorting a cell and losing power. Once 36 cells are tabbed along the front, I laid them out in 4 strips of 9 cells that I will wire all in series later to get an 18V open-circuit panel. Each cell produces roughly 0.5V, 36 in series gives 18V. This is the recommended configuration for charging a 12V battery bank, as when a load is placed on the panel, the voltage will drop. 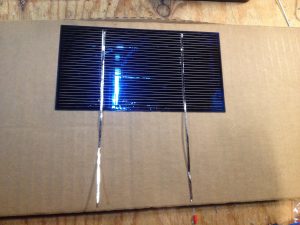 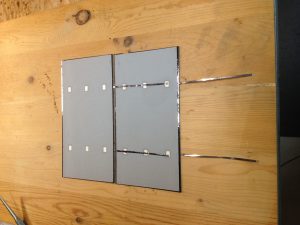 After finishing tabbing all the strings, I laid them down on top of each other (big mistake) and did not have time to come back to them for a few weeks. When I finally got back to them, some of the had stuck together where the solder joints were, and I broke 2 or 3 cells trying to free them. After laying the 4 strips out on the foam backboard, I passed the main positive and negative wires through to the back side, wired the rest of the cells up in series with some bus wire, and added a 20A anti-backfeed diode to prevent the batteries draining in to the panels.
When spraying on the clear spray paint, one of the brands I tried started reacting with the rigid foam insulation and melted the top layer of it. If you were wondering why the back and front of the insulation look so different, that’s why. 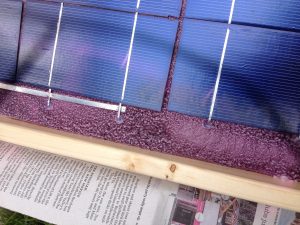 Testing it revealed an open circuit voltage of roughly 17V, and a short circuit current of 3.5A. Total cost of the project was around $60. For a 50W panel, I’d say that’s not too bad.
This panel will be used to charge my DIY Powerwall once I get a boost converter figured out, as the Constant Current on the 1500W one I bought does not work. With a solar panel this is not a problem, but charging from mains I do not want to draw too much current from any power supply that I use.
If I were to make my own solar panel again, I would not put a strict price constraint of the cheapest possible panel on myself, and would go for an epoxy resin cover instead of the spray paint. This would be much more durable, and thus I would use it much more.