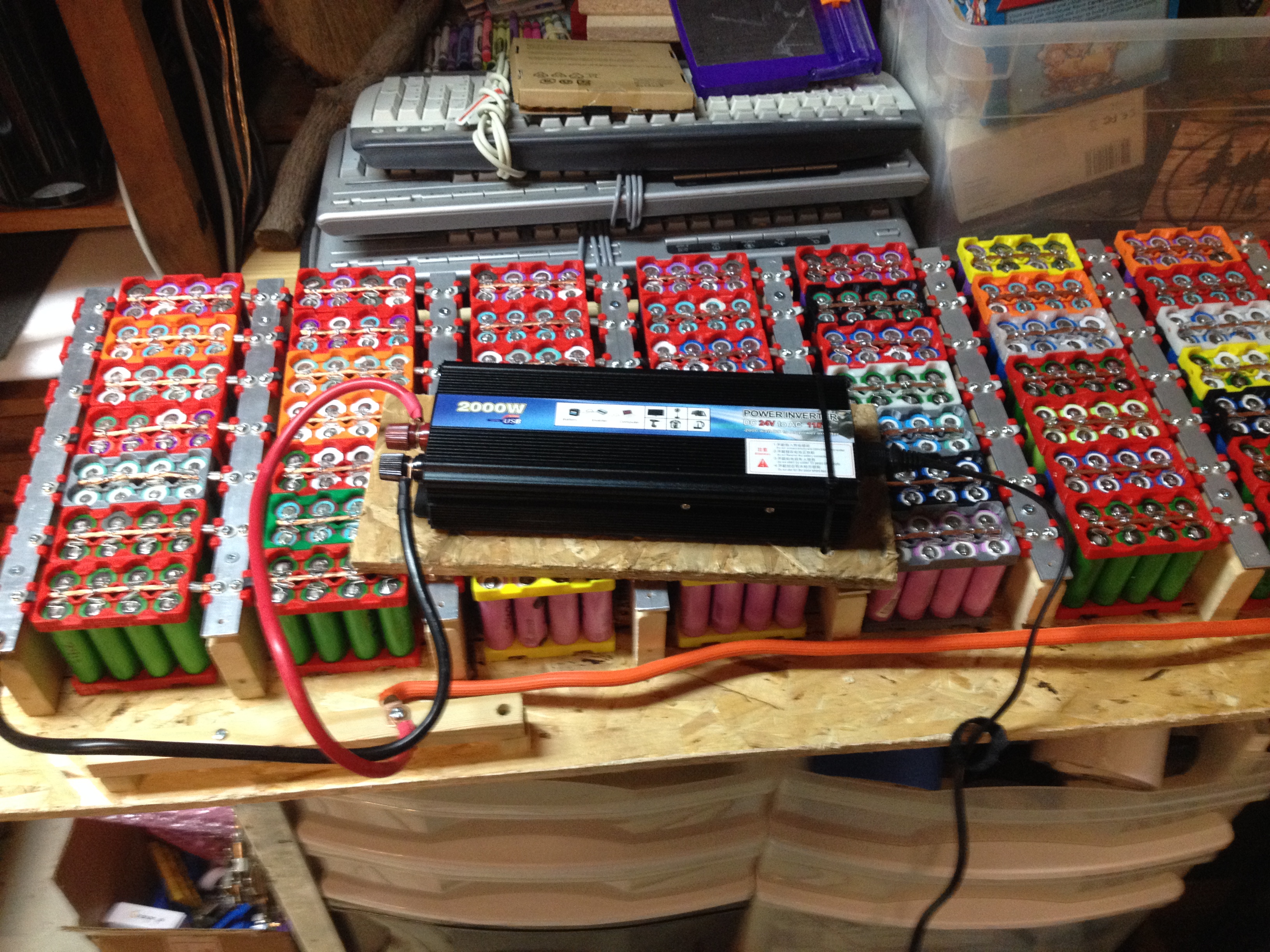 My 2.4kWh powerwall is finally complete!

Printing the holders took a long time to do, and I thankfully had a friend help out with the printing. I had to print out almost 100 holders, using just over a full roll of filament. 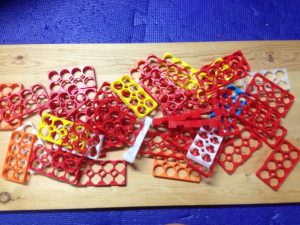 Then came the brunt of the work – making over 1500 solder connections for this build (It took a while). I did most of the soldering outside because there is much better ventilation, and the weather was nice, so why not take advantage of it? 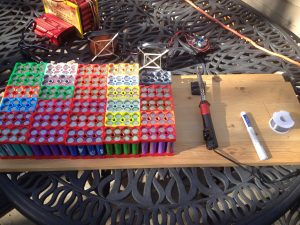 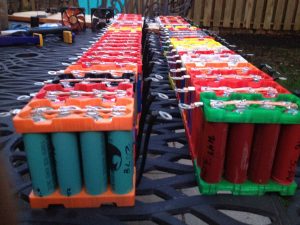 The positive end of each cell was soldered to a 4A fuse. I chose 4A, as this power wall was also designed to be able to run an electric car that I worked on for the Waterloo EV Challenge with the EVPioneers. and needed to be able to supply 150A burst current. I only had enough 2A and 4A fuses, and the 2A would not give me enough power. For use as a power wall, I would recommend using 1 or 2A fuses because it will keep the cells within reasonable operating limits. Yes, most cells when new can do 4A (2C) continuous, but after a long life in laptops, it is safer to keep them under 1C continuous. 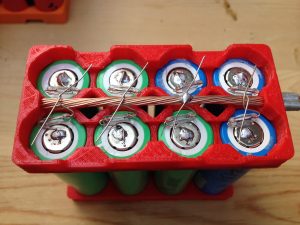 The negative end was connected to the bus bars with the extra legs of the fuse wire that were cut off from the positive end.
And that brings me to the bus bars. I was originally planning on using copper – either flattened copper pipes bars, but after checking prices and feasibility, I decided against it. I couldn’t find an easy way to attach the 8 cell modules to the copper pipes without soldering, and comparing prices of copper bars to aluminum bars, I went for 1/8″ * 3/4″ aluminum bars.

Attaching the 8 cell modules to the bars was another adventure. On each of the 8 cell modules, the fuses were soldered to a wire with a screw terminal on the end in order to be able to swap out the 8 cell modules without soldering. I was originally planning on using 16AWG wire for this, but after checking out the 12AWG wire that I had lying around, the 12AWG was a lot easier to strip, and would heat up less under heavy loads. On the positive end, I made the wire just slightly longer than the modules in so that they would fit in the smallest space possible, and have just enough room to crimp a screw terminal on to. The negative end got a wire that was bent up to the same level as the positive wires. I covered this longer wire with heat shrink as much as possible, 3 separate sizes to prevent it shorting out where the positive end just pokes out the end opposite of its screw terminal. 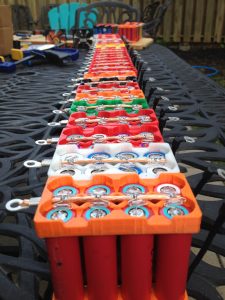 Now for actually getting these parts – a $70 trip to the hardware store later, I came back with 8ft of aluminum, 100 12AWG screw terminals, 200 6-32 nuts and bolts (they were the cheapest), and some wood for the frame. 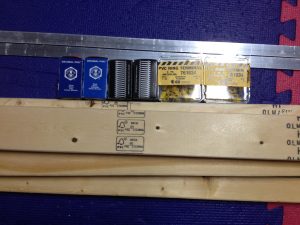 I cut the aluminum into 1ft lengths, then drilled lots of holes in it for mounting the aluminum to the frame of the power wall, and for the screw terminals to attach to. I did not want to have to get out a pair of pliers to hold the nuts in place and risk shorting something out when screwing the packs on to the bus bars, and I had recently seen Adam Welch make some captive nuts on his solar shed bus bars. So I designed a similar system that will hold 2 nuts. After printing out 56 of them, I started putting the nuts in, and sliding them on to the aluminum bus bars. 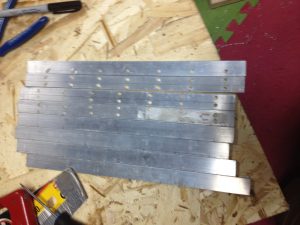 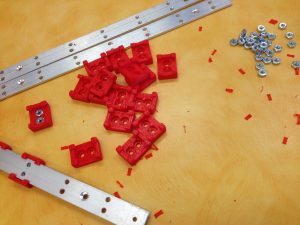 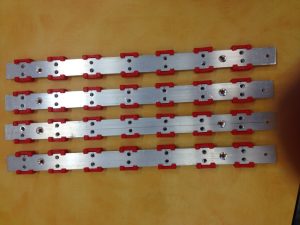 The frame of this power wall is made out of wood. I really should have used something non-flammable to mount everything to, but I could not find a metal cabinet or something similar in the right size. I also didn’t want to spend $150 on an enclosure, so wood it is. With all the testing I have done on these cells, and individually fusing each one, I do not think there will be any problems. I will be constantly monitor this looking for heaters, and checking voltages. 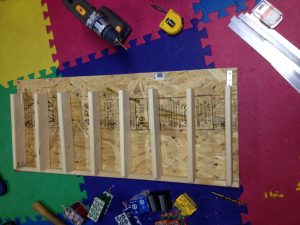 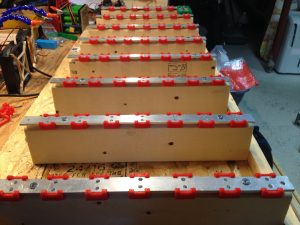 Each parallel group is separated with a piece of 1×3, which I mounted the aluminum bus bars on top of. Once all 8 bus bars were mounted, I started adding the packs in, balancing capacities as best I could while at it. I used an impact driver to tighten all the screws – I had previously replaced the aging NiCad in the impact driver with 18650s, and it’s still working great. I did run in to one 3D printed holder that I stripped, but thankfully it was at the end of one of the bus bars, so it was an easy replacement.
To finish up, I added a 150A circuit breaker to the positive end, and added a 1/4″ clear acrylic sheet over the top of the batteries to prevent any shorts. 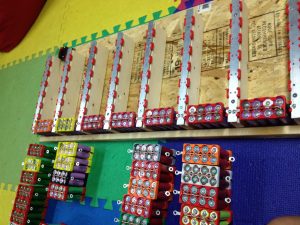 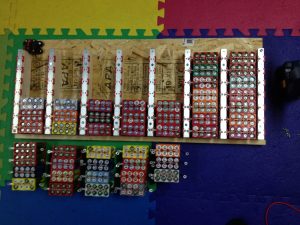 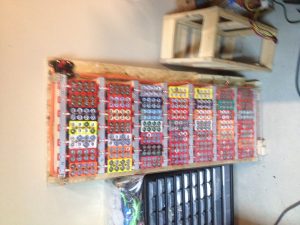 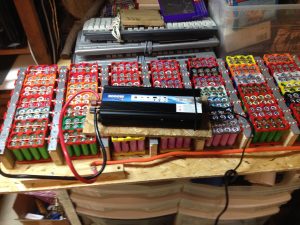 The inverter I used for this is a 1000W modified sine wave inverter. It was one of the cheapest ones on Amazon, and that would probably be the one component I would change if I did do this again. On the other hand, pretty much my whole workshop is powered with DC, so it’s not too big of a problem. I do like it though, because it heats up my 60W AC soldering iron better than the house AC. My regular soldering iron – a Hakko T12 clone – is powered with DC, as well as my lights, and I will eventually add my 3D Printer to that list as well.
I have yet to stress this battery out, or do a proper capacity test, but so far, it’s been amazing.