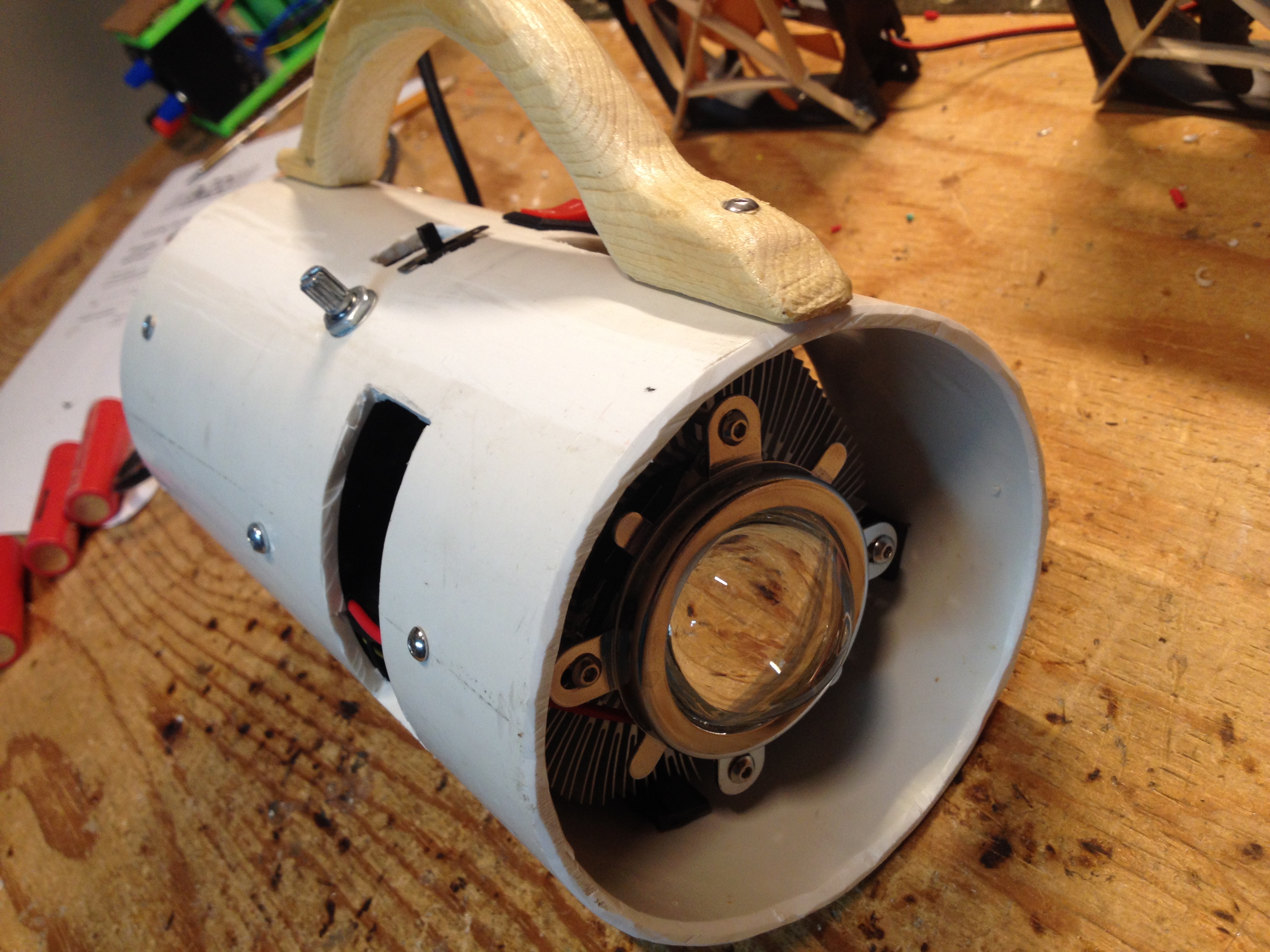 Back for round 2 of my 100W LED flashlights. I enjoyed the first one such much and used it enough that I decided to build another that solved a few of the annoying problems with that one (terrible battery life, constantly monitoring battery voltage, battery outside the main casing).
I’ve been thinking of building this for a few months now, and from the time finally decided to go ahead and make it, it took me around 8 hours of work on it to complete it. That includes making the custom battery, testing all the parts, and choosing resistor values.

Let’s start out with the choice of parts. I mounted everything inside a 4″ PVC pipe because I had seen it done before (link), and it is much sturdier than the MDF I used for the original.
As for a heatsink, I had to find one that fit inside the 4″ pipe. A stock Intel CPU cooler is perfect for this. For the control circuitry, I used pretty much the same parts as the last one – a 150W boost converter, an XL6009 Buck Boost converter, 2 potentiometer, and I also added an extra switch and USB buck converter to have a USB charging port.
The batteries I used are 12 Grey Panasonic NCR18650 from old laptops, all around 2800mAh. The BMS is a 4S 30A BMS from aliexpress, and works perfectly, as far as I can tell. I added a voltage monitor to the back of the flashlight as well.
And of course, we cannot forget the 100W LED, and accompanying lens.
I used M3 nut and bolts for all the attachments, as I have plenty of them lying around, and they are very common. 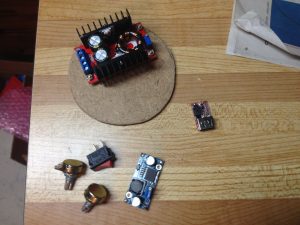 Starting with the control circuitry, I used a rotary tool to cut out a circle of MDF slightly smaller than the inner diameter of the PVC pipe to mount all the electronics to.
The boost converter is being used to boost the voltage of the battery pack up to a maximum of 32V for the LED. Anything higher than that, and the LED will start to draw too much current, heat up, and possibly explode due in incorrectly matched diodes. If you want to find out more about why this happens, check out BigClives’s video on it. Always be sure to know what you are doing when playing around with high power chinese LEDs.
The original potentiometer on the boost converter is a 10K trimpot, but that obviously had to come off if we were going to be able to adjust the brightness form the outside of the case. I started out with a 10K potentiometer, and figured out what resistance caused a maximum voltage of 32V, which turned out to be around 9K. I used a 5K potentiometer in series with a 4K of resistors to max out the voltage at 32V, but still have an adjustable voltage.
I also wanted to be able to control the fan speed, so I did the same procedure for the XL6009 buck boost converter, max voltage of 14V to overvolt the 12V cooling fan to give maximum cooling performance. I feared that the small intel heatsink would not be enough to properly cool the 100W LED at full brightness for very long. It turns out that the stock Intel fan has a built-in speed controller, so this turned out to be useless, but I did fry one fan while figring this out.
While testing the buck boost converter for the fan a potentiometer failed, and created infinite resistance between the wiper and the edges. This triggered the buck boost converter to boost to its maximum voltage which turned out to be over 60V. This let the magic smoke of the stock Intel fan, so I had to grab another from my bin, but I didn’t put it back in circuit until I had replace the potentiometer and tested the voltage numerous times on the output. I was surprised that the buck boost converter went up to such a high voltage, since its max adjustable output voltage is around 35V, the same as the capacitors are rated for. I’m glad (and surprised) I didn’t blow any of the capacitors, pushing 25V over their limit through them. Just another example of chinese engineering. If I had not caught this before I mounted it, the capacitors would have been taking that 60V for a much longer time before I realized what had happened, and most likely would have blown. 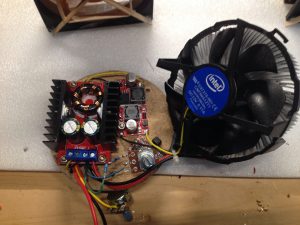 The USB Buck converter was also added with its own switch, and required no special wiring. Interestingly, there are no markings on the board to mark input polarity, so I got out my multimeter and testing for continuity between an input pad and the grounded USB shroud.

One quick note – controlling these LEDs with a voltage limit is not the proper way to do it. A current limiting circuit is much better, and will prevent the LEDs from burning no matter what the voltage is. They are much more expensive though, so I am sticking to voltage control, but limiting it below the max voltage. These LEDs can take up to a maximum of 36 volts (I believe) if properly controlled with a current-limiting device. I would highly recommend not driving chinese LEDs at their maximum specs, as that increases the chances of danger (again, see Big Clive’s video that explains much better why this is dangerous). I tested my LEDs, to make sure that they were not too far out of balance with each other. As you can see from the picture below, mine were matched fairly well – much better than the ones shown in Big Clive’s video. I am driving my LEDs at a max of roughly 33V. 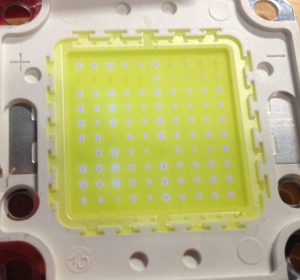 To attach the LED and lens to the heatsink, I drilled 8 holes around the center, one set of 4 to fit the LED and the other set of 4 to fit the lens mounting points. I used M3 screws, and they tapped themselves into the aluminum very well. Before screwing the LED down, I put a blob of thermal compound in the middle of the heatsink. Same procedure as CPU mounting CPU coolers to a CPU. 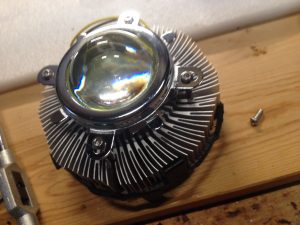 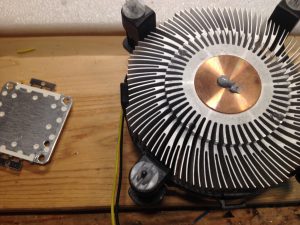 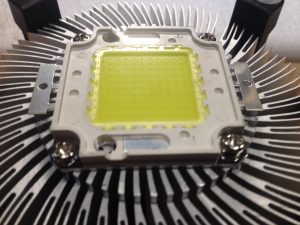 Once I got all the control electronics figured out, I went on to cutting the PVC pipe and mounting everything to it. I drilled holes for the potentiometers, switches, and screws, then went outside to use a rotary tool to cut out the ventilation holes, cut the tube to length, and enlarge some of the drilled holes. It is very important to do this is a well ventilated area, and ideally use a face mask to avoid breathing in the PVC dust. 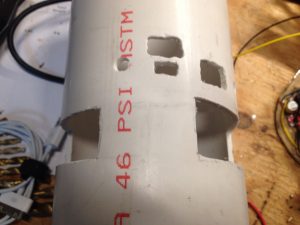 Using some 6-32 screws, washers, and some galvanized strapping, I created a mount for the MDF control board, and then mounted it in the pipe. After soldering the LED to the output and verifying that it worked, I put that inside the pipe as well, and drilled 2 holes through the plastic fan mount in order to attach it to the PVC pipe with some M3 screws. 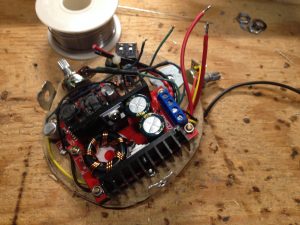 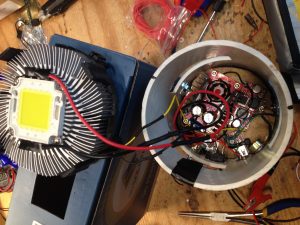 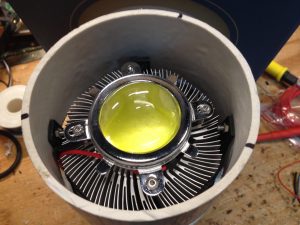 Next I worked on building and mounting the custom battery. As I mentioned earlier, the battery is a 4S3P configuration, made up of Panasonic NCR18650 cells from old laptops, all around 2800mAh. Each cell is individually fused on the positive end with a 3A fuse, and the negative ends were soldered together with nickel strips. 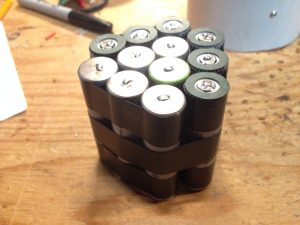 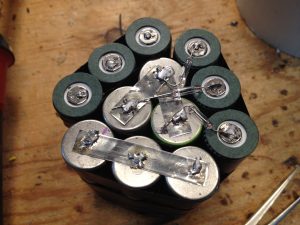 The BMS output is connected to the input of the boost converter for the LED, and the buck converter for the USB port. I also added an extra XT-60 connector to the main terminals of the battery, as well as a balancing harness in order to be able to charge the battery with a hobby charger. I put a piece of foam in the back end of the flashlight to cover all the screw heads on the MDF board, wrapped the battery in 2 layers of foam, then put the battery in and another piece of foam on top. Packing the battery with foam is definitely not the best for heat, but I do not anticipate it to be a problem. These battries can supply a max of roughyl 15A, and I will only be drawing about 4A. To keep it from falling out the back, I added another piece of foam, and put an 80mm fan grill on top. I cut out part of the fan grill in order to put a 4S voltage monitor and a switch to have a rough idea of the battery level without any hassle. The screw holes in the fan grill were bent downwards and pushed around the outside of the foam so that 4 computer fan screws could be screwed in to PVC where I had previously drilled holes, and hold the fan grill in place. 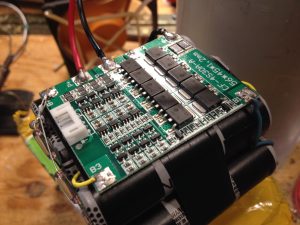 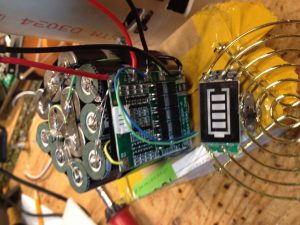 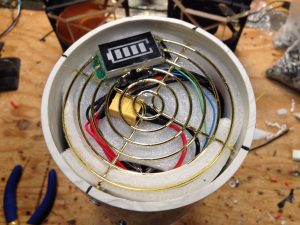 All the was left to do was add a handle, so I cut a rough shape out of a piece of 1×4 with a jigsaw, then sanded it down with a rotary tool, and drilled a hole in either end of the flashlight and the handle to mount it securely. I added a layer of clear gloss acrylic spray paint to the handle to give it a bit of protection against moisture. 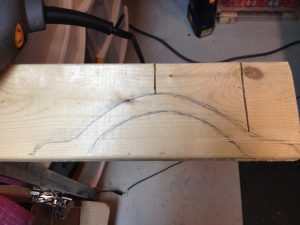 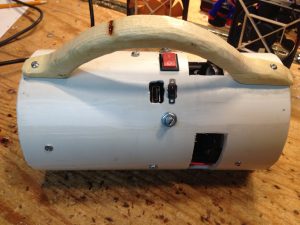 With that, my second 100W LED flashlight was complete! If you want to see the first one, you can check it out here. I like this one much better, as it is all in one self-contained unit, therefore is much easier to use and handle than the previous one.