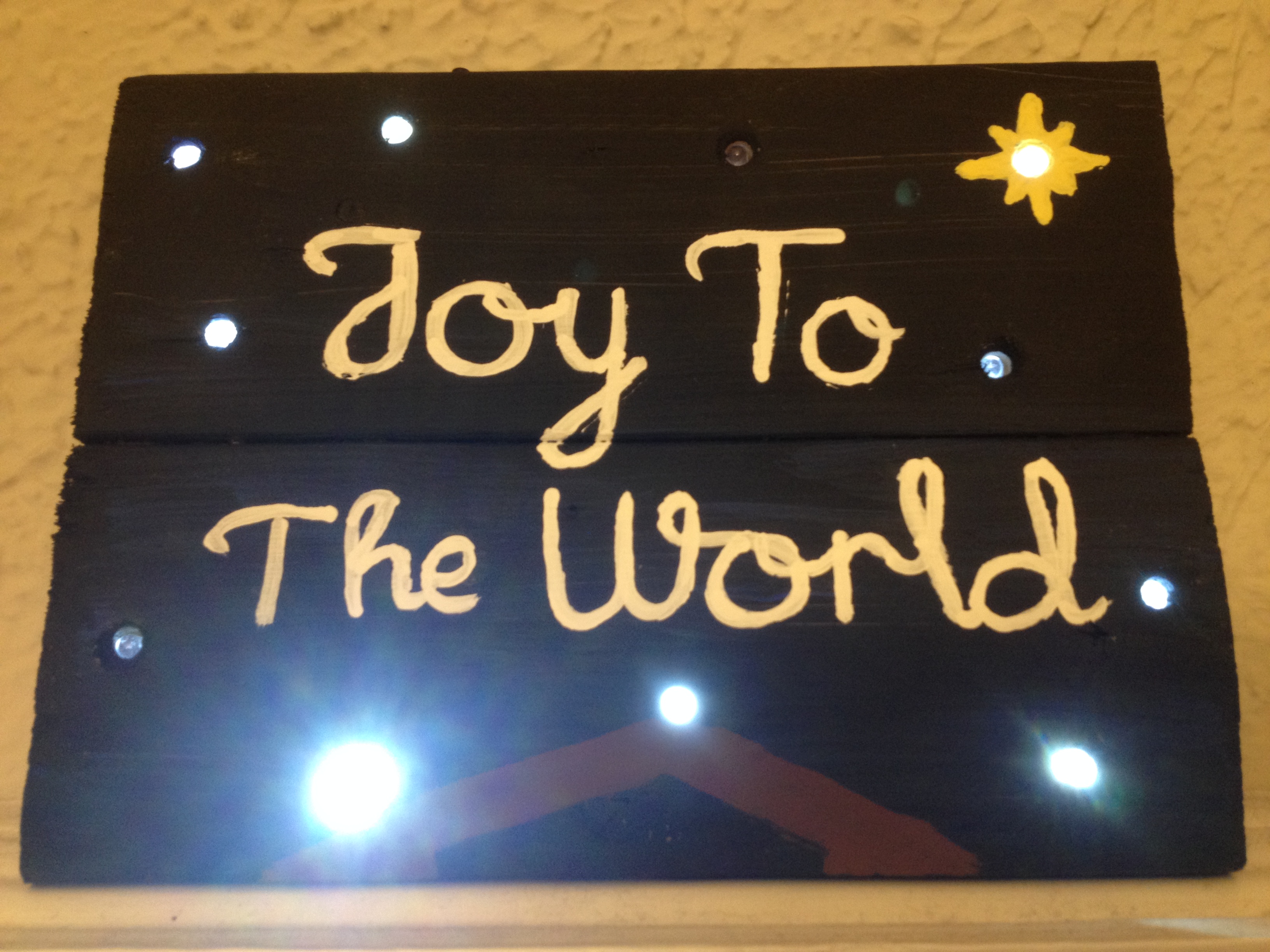 This idea came from a few different places. I saw a wooden sign with LEDs on it at a craft sale, and thought it looked amazing, and simple to make. A few weeks later, I found Julian Ilett’s videos on ring oscillators. Putting the two together seemed to make sense, so I did. Over the next few days, the first sign started to come together.

I know its not quite the time of year for signs like this, but it sure does feel like winter again – in April 2018 – so I’ll post this now. 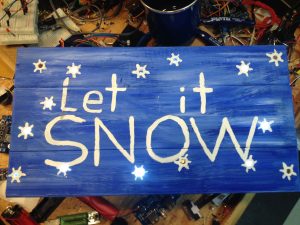 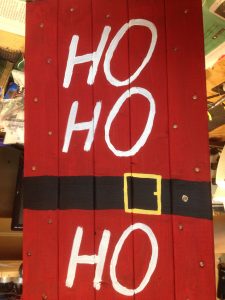 You can see a video of it in action here.

The wood needed for these signs is pretty simple. A few pieces of wood, all the same length, get lined up beside each other. Then get 2 more pieces of wood, the same length as the width of the other boards, and hot glue the widthwise across the back to hold everything together. Then put 2 screws into each of the longer boards, 1 through each of the shorter boards along the back. If you flip the boards over, you should have a flat surface of multiple boards lined together. Sanding it is possible, but not necessary. It would make it look better, but unless you have a belt sander, I would not bother with it. As for the size of the sign, the Ho Ho Ho one is probably around 50 x 30cm, while the Joy To the World one is roughly 30 x 20cm. 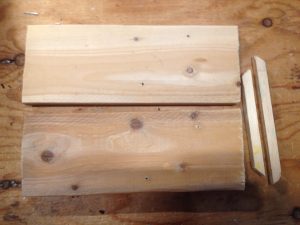 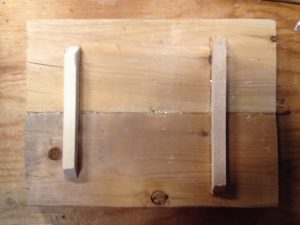 Regular acrylic paint from a dollar store is the easiest way to paint the wood. A clear acrylic spray sealant will go over it once finished, so that the paint will not chip either. I start with a solid color for the background, then add all the details. All the ones in the pictures, I painted by hand, and they didn’t turn out to bad – I definitely would not consider myself an artist. 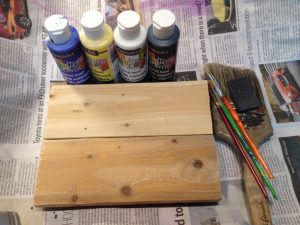 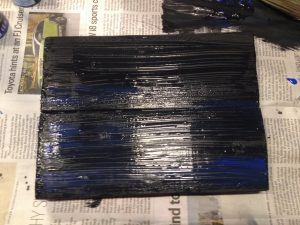 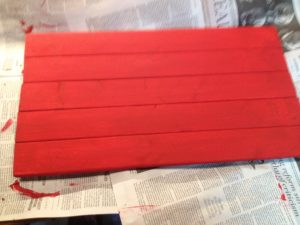 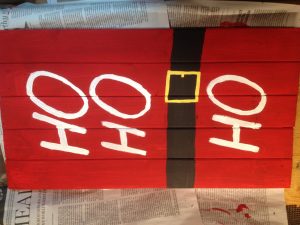 Drill holes for LEDs and gluing them in

Next up is drilling the holes for the LEDs. I used 5mm white LEDs, so I used a 5mm drill bit to make holes for them. One of the special things about a ring oscillator (the circuit we will be using to flash them), we need an odd number of LEDs, so make sure to drill an odd number of holes. Also, make sure to avoid the braces on the back or else you’ll have a hard time soldering wires to the legs of the LEDs. Once the holes were drilled, I countersunk them from the front to be able to see that LEDs a little better, then repainted the holes. The LEDs went in from the back and were glued in place with some hot glue. 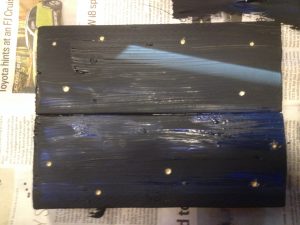 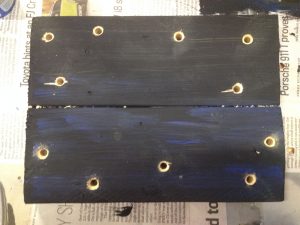 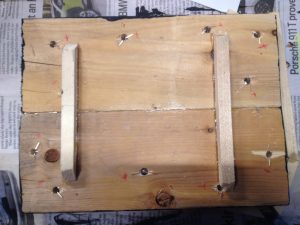 Soldering the Circuits on the LEDs

For every LED on the sign, a 2N3904 transistor, a 5-10uF capacitor, a 1K resistor (for current limiting the LEDs), and a 100K resistor (for passing the signal from one LED to the other) is also needed. An extra 100K resistor is also needed to make the LEDs flash a little more randomly. This extra resistor will go from one OUT from one LED circuit, to an IN connection on another LED an odd number of steps away. Connect the circuit as shown in the pictures below. 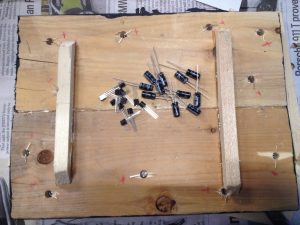 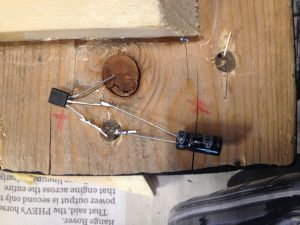 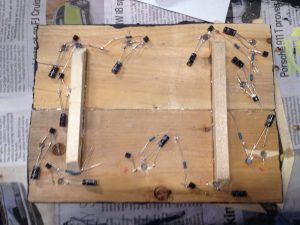 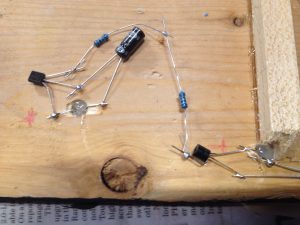 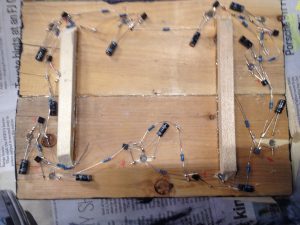 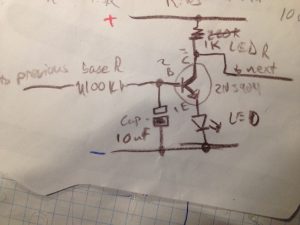 First off, the LEDs need roughly  2.5V to shine, so we must supply it with greater than 2.5V. The other consideration is the higher the voltage, the faster the LEDs will flash, but you cannot have a voltage that will give too much of a current through the LEDs. With a 1K current limiting resistors, don’t put more than 9V across the circuit. This can be powered with a USB power bank, but I think 3AA batteries is the best. Just be sure to add a switch in the circuit as well. For the main power wires, I run 2 wires all along the outside of the circuit, and strip them where they need to be connected. Insulated wire is harder to work with here, but is better because it will prevent shorts – sometimes you do have to cross the wires.

I finished them up by covering them with a  layer of clear acrylic spray paint so that the paint would not chip or come off. 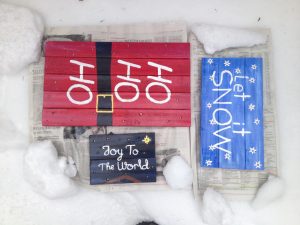