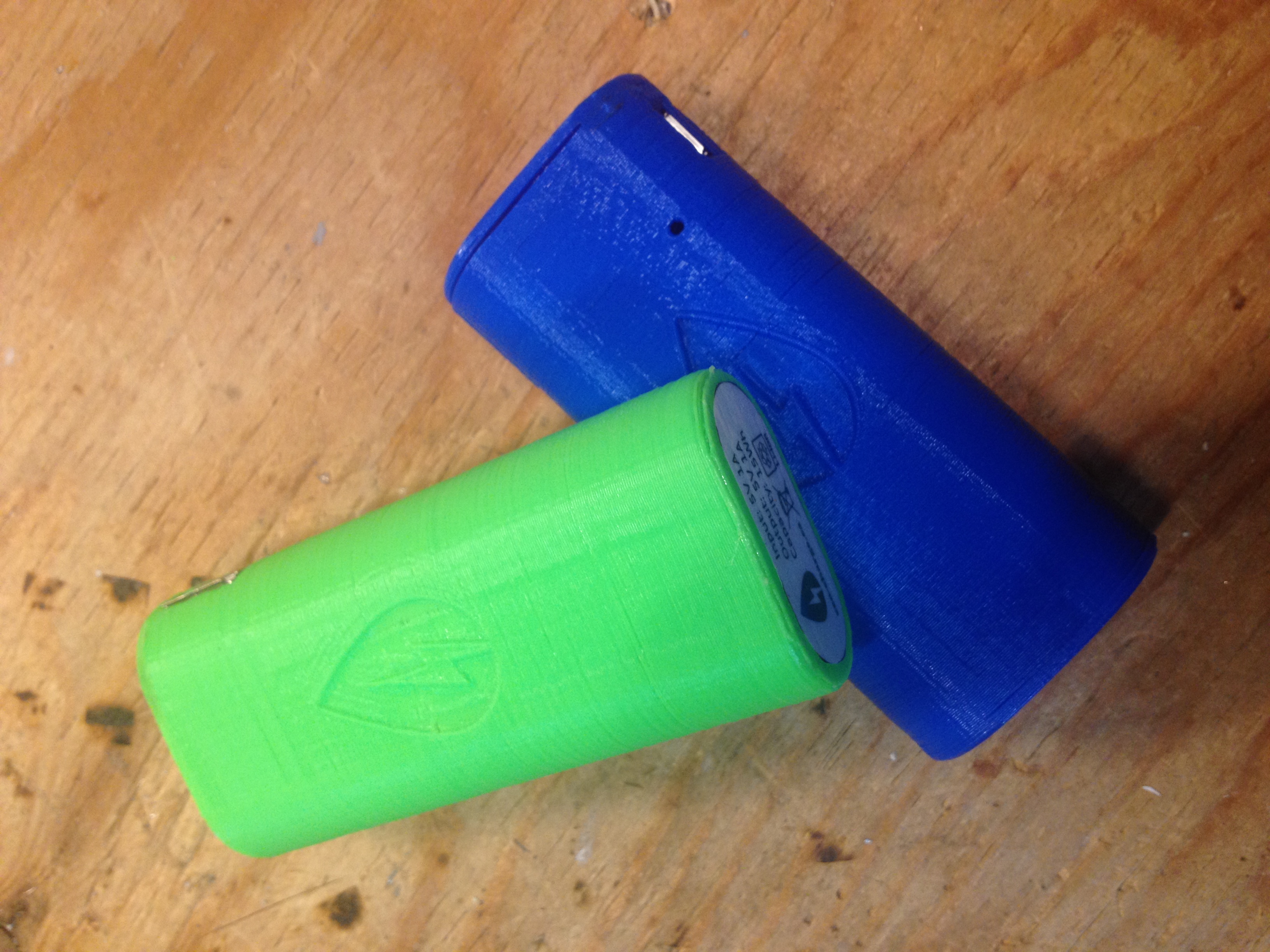 One of the projects that I have been working on for the past year or so are portable USB power banks made out of recycled laptop cells. These power banks are ideal for hobbyists and for powering Arduino projects because they are controlled on and off by a switch. Most commercial power banks have an auto-on function, that turns on when a USB cable is plugged in, and  stays on if is is drawing more than a few hundred mA of current. For most Arduino projects, this does not work because the power bank will keep turning off after 10-20 seconds. With this power bank, if the switch is on, then there will always be 5V on the output (unless the batteries are depleted). I use these all the time on my workbench to power and test small projects. They are very simple to make, and the total cost is under $3 in components (except testing equipment). 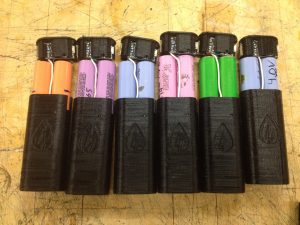 At my school this year, I participated in the Junior Achievement (JA) club – where a bunch of students get together, choose a product, and start a business. I pitched these power banks as the product for the year, and it was enthusiastically accepted. We manufactured and sold over 100 power banks, and re-used over 50kg of lithium-ion batteries.

I was the VP of production, and was responsible for safely designing and creating over 100 power banks. We already had a prototype to prove that the product would work, but it needed lots of refining in the components, design, and instructions. We produced a power bank made from recycled laptop cells, and open sourced the design, schematics, and instructions so that anyone in the world can reproduce our design and save more laptop batteries from landfills. 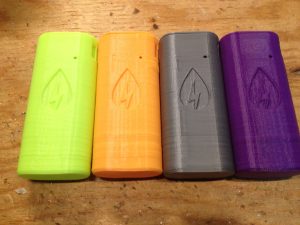 One of the main things that kept the production costs down was that we could get the batteries for free from computer shops and other recyclers, so they cost nothing. However, using recycled batteries did pose some potential issues with safety that we had to research and test first. Each battery required over 40 hours of testing before it could be used in our power banks. We explored buying new batteries, which would alleviate the testing time, but they would cost $10 per unit almost tripling our production costs, reducing our profit to under $2 per unit. The first few weeks of production were spent emailing and phoning local computer repair shops, computer stores, and electronics recyclers about getting their batteries for free. We contacted over 50 companies, but only heard back from about 10, and only 5 could give us their batteries. Getting batteries for free was proving to be harder than we thought. One of the electronics recyclers (EDI / Foxy Recycle) that gave us some free batteries had thousands available that they would also sell. Given that this seemed to be one of the only places in Ottawa that had the amounts of batteries that we were looking for, we decided to buy them from there, at a price of $0.30 per unit (30 times cheaper than new cells), and they had all the batteries that we would ever need. 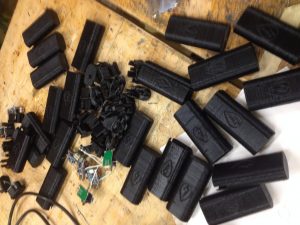 Getting this product approved by JA took longer than originally expected. Most of the JA executives were cautious of the idea of a group of high school students making portable phone chargers out of recycled laptop batteries, which are classified as a dangerous good. From my extensive experience working with electronics, I knew that this product was safe and needed to communicate that to the authorities. We had to compile a lot of research on the specifications, charge and discharge rates, and safety features of all the components that we are using, especially the batteries and the protection circuit. Personally, I poured over 25 hours into making a document that outlines all of the safety features, and precautions that we are adding to ensure that nothing goes wrong. The potential issues with the production process, as well as the finished product, were all examined to make sure that there would be no problems in any aspect of making these power banks. In the end, we made sure that our product had overcharge protection, over discharge protection, short circuit protection, and overcurrent protection, which are standard on all commercial power banks. We also went the extra mile and fused the cells, which is not commonly done by manufacturers, to provide an extra layer of protection. Each cell needs to be thoroughly tested for IR, SD, capacity, and heating. This testing takes over 35 hours (3h charge, 24h sit, 8h capacity) to complete per battery. Our off-site testing station can handle up to 76 batteries at once. All this testing was done with my 76 cell 18650 Li-ion battery tester. 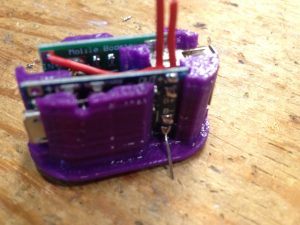 The design, made in Fusion 360 – a 3D design program widely used in the industry – went through more than 10 prototypes before getting the final version. These each required more than 3 hours to print, and a few weekends were spent refining the design. Finding a way to manufacture the cases was another challenge that we faced. 3D Printing them during the JA hours was not possible, as we would only be able to print 1 per week during each 3 hour period. We started looking into resin casting the cases, and found that there were high up-front costs. There is also a very steep learning curve and it would have taken $30 and a week of time per prototype for testing. With our 10 prototypes, pre-production costs would have been over $300. Resin is also very bad for the environment compared to 3D printed PLA plastic – made from corn starch – so it didn’t feel right labelling our product Eco-friendly if the casing was harmful to the environment. We started looking at other methods of small scale manufacturing possible on a tight timeline. With 3D printing, the prototyping costs are the exact same as the costs for the finished product, and it takes only 2 hours and $2 make a new prototype instead of a week and $30 per prototype. The common 3D Printing manufacturing services, such as Shapeways, were way out of budget for us, so we started looking at local options. The UOttawa makerspace had lots of printers available for free to the public, but to make something to sell, they would charge almost $5 per case. After some more research, we found a local company in Ottawa, r3dprinting.ca, who was willing to print the cases at $3 each, and could make 50 in a few days, exactly what we needed. For the first set of cases, we ordered them from there, but subsequent ones, we were to get them printed with A2D Electronics, and still keep up with the rest of the production chain. 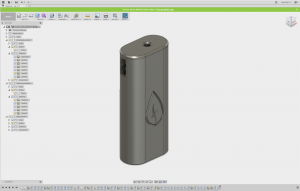 One of the other issues we faced was figuring out if we needed to get the product certified, and what labelling was required. Because it is all low voltage DC, we were not required to get it certified, but still needed proper labelling. We explored adding the labelling to the 3D Printed design, melting it in after it was printed, and settled on printing a label out on a color laser printer. We used mod podge and acrylic sealer to attach it to the bottom so that it will not fall off or get damaged with water.

Strict quality control testing was also necessary. We used a USB tester, which puts a 1A load on the USB ports to simulate charging a phone to ensure that every power bank was able to supply the rated current, and did not have significant voltage droop. Testing the recycled batteries followed a strict procedure as well, testing for internal resistance, self discharge, and capacity, the 3 indicators of a cell’s health. 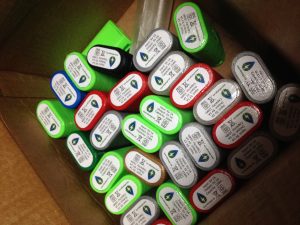 The design, schematics, 3D printing files, and instructions are all available below. This means that anyone in the world, can replicate our power banks and save lithium-ion batteries from landfills. My design is now being modified by UOttawa graduates to build a solar powered reading light. We re-used over 50kg of batteries, and created a product and testing methodology that is reproducible worldwide.

Stay tuned for more posts regarding my these portable power banks. I plan on making several improvements to these in the future, including complete instructions, and possibly a custom PCB, and larger capacity.

Full instructions and an overview of the components will be coming soon.

All the STLs required for 3D printing the cases can be downloaded here.

If you make one, I would love to know and get some pictures of it!